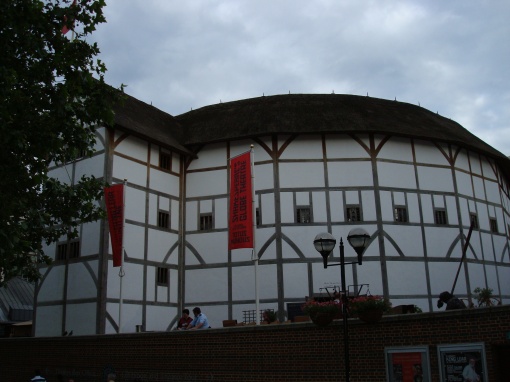 “When we are born, we cry that we are come to this great stage of fools.”
— King Lear

At lunch, the Texan tells us that she walked her little white dog through the streets of London and because of the smog, now he’s a little gray dog. The Texan is not really a Texan but a New Yorker. That’s where she lives now. Her dog is a Maltese terrier, not a bichon frise, like my little white dog, who’s often a little brown dog because she lives in New Mexico, which is where I live now but not where I’m from.

Only some of this day is making sense, because it’s my second day in London, and I’m still jet-lagged, trying to tell my stomach that it’s lunchtime, not sleepy time. Those of us who have arrived in London for the Spalding University MFA in creative writing program are having a gala luncheon on the first floor, which is really the second floor. That’s how they do it in London. What Americans call the first floor is the ground floor. After that is when the Brits start counting floors. We are at The Peasant, a gastro pub in Finbury, which seemed like it was just around the block from our hotel, but it wasn’t. To tell you the truth, I don’t know where we are. I am armed with a Tube map and an Oyster card, but the buses are another story entirely.

The Texan who’s a New Yorker now announces that many of the streets will close tomorrow because President George W. Bush is coming to visit The Queen, who really is a queen meeting the man who is not really a president. He seems to have taken the lame duck jokes as a serious charge and have abdicated any leadership responsibilities during the subprime meltdown and energy crisis. Or maybe he’s just been afraid to come out in public and we’ll find him naked and wandering the heath, which is to say that several of us are going to see “King Lear” tonight at the Globe Theatre and I can’t help see a few parallels.

Our program coordinator confirms that the arrival of our fearless leader will affect us, announcing the names of Tube stations that will be closed tomorrow, right at rush hour. Names like Russell Square, Green Park and Leicester Square mean nothing at this point, but they surely will over the next few days as we navigate our way to Picadilly Circus, which isn’t a circus, and Westminster Abbey, which isn’t a church but a national peculiar. A clipboard gets passed around for us to sign up for a taxicab.

To get to the Globe Theatre, the best way is to take the Tube to Blackfriars Pub. When my companion and I emerge onto the street, we see there’s a pub wedged onto a street corner, and just above the sign, written in Old English, is a statue of a squat black friar. I think he’s smiling. He’s sort of a hood ornament for the building. He doesn’t seem to mind. He seems sort of merry.

This black friar has a link with the history of our destination. The Blackfriars priory nearby had a hall that in 1596 was used as an indoor theater. When the lease expired, it was decided that a theater would be built. Members of the acting company were offered the opportunity to buy shares in the new building, which became the Globe Theatre in 1599. One of those actors who owned the place was William Shakespeare.

The Globe Theatre where we’re going isn’t the real Globe Theatre where Shakespeare’s plays were staged in the late 16th century but a replicated theater that was built authentically to the time. Authentically means there are two thick columns that block some views, the seats are wooden and some people stand at stage’s edge. In that time, a flag would go up in the street announcing that a play was starting. For one pence, you got to stand. For two pence, you got a seat on a wooden bench. For three pence, you got a cushion. The flyer that circulated through the streets to announce the play had M. William Shak-fpeare at the top. It says, “HIS True Chronicle Hiftorie of the life and death of King L E A R and his three Daughters/ With the vnforunate life of Edgar, fonne and heire to the Earle of GlosFter, and his fullen and afflumed humor of Tom of Bedlam:”

It is with afflumed humor that we find our way across the Blackfriars bridge to the Southwark area of London. On the river walk that leads to the Tate Museum of Modern Art and the Globe Theatre, my companion and I strike up a conversation with two Brits who are enjoying cups of beer in the street. We do this mostly because we don’t quite know where we are going. I ask if the bridge above us is the Millennium Bridge, but it’s the train bridge, painted cherry red and apple green, like something out of Thomas the Tank Engine that might lead us to the Isle of Sodor, if only that was where we were going.

Farther on is the Millennium Bridge, which was supposed to be a bridge of wonder, a cutting edge suspension bridge design that featured a four-meter aluminum deck and stainless steel balustrades. It was supposed to have a shallow profile, supported by eight highly tensioned cables on each side of the deck, with two river supports. It was supposed to open in 2000, but I read later that it had such a sway to it that elderly people were clinging to the handrails and people were getting seasick while crossing it. After two long, embarrassing days for the architects, it was closed and re-engineered, re-opening in 2002.

I tell our new Brit friends I’m from New Mexico, and the eyebrows go up because they only hear “Mexico.” But this is all cleared up rather nicely, and the gent says he’s been the United States, and oh yes, he certainly knows where New Mexico is. I ask him if he knows where Santa Fe is, and he says, “Oh, that’s near the water, right?” with a smirk. “It’s in the Appalachians, right?” A wink. The lights switch on the Millennium Bridge. It looks like a silver bullet train captured mid-streak.

Farther on the river walk, we see the Globe. The replicated theater is a 20-sided polygon 100 feet in diameter, authentic to the dimensions of the original. The facade is plastered with a white lime wash, authentic to the time, with Tudor-style squares and triangles marked off with green oak timbers. The roof is made of water reed thatch and is open to the sky. When we walk in, a small band of dancers and musicians is clustered at front-center, playing a Celtic tune. It is twilight.

During the play, in another authentic 16th century moment, a woman faints, thudding to the ground. The actors don’t miss a beat. The play proceeds on until one of Lear’s daughter gouges out the eyes of the Earl of Gloucester at center stage, sitting atop him like she’s doing a lap dance. She tosses the bloody globe to the ground. With that, the first act is done.

One of my companions asks, feeling a sense of finality with that scene and not remembering her Shakespeare clearly, “It’s not over yet, is it?” I don’t remember it clearly, either, but I remember this much: “Cordelia comes back. And it’s not over until everyone’s dead.”

“Howl, howl, howl, howl,” rants the incapacitated King Lear as he’s lost in the heath with a fool and a beggar in the final act. “Had I your tongues and eyes/I’d used them so that heaven’s vault should crack/She’s gone forever.” The program points out the plays rich linguistic range, full of mad babblings, gaudy rhetoric and courtly viciousness – an ocean of language. “Pray you, undo this button,” King Lear pleads as he wishes for death. And then everyone is dead, the stage of fools littered before us. After the final bows, the company returns to the stage, performing a haunting Celtic dance. They are like ghosts emerging from the mists of madness. We leave the 16th century not by the way we came, but on foot, riding the gleam of the Millennium Bridge.