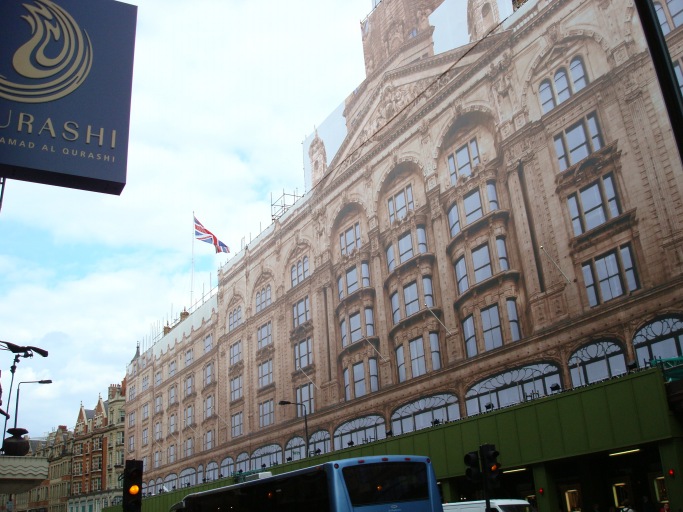 A word to the wise: Don’t do London on jet lag. The first time we step out onto Pentonville Road, it’s a rush. My heart beats faster. Double-decker buses and chunky cars fly through the street at the speed of lightning. It’s a 220-volt experience. I’m on 110 volts and only three hours of sleep on the plane.

Walking along the street, I feel like I’m slipping on the muddy banks of an electric rushing river. “Is there a speed limit?” I say to my fellow London trekkers as we set out for Oyster cards and the King’s Cross Station. We are heading to Kensington Palace. I crane my neck to look for a speed limit sign, but I need to be alert. Look right, look left, look right, I remind myself.

The first Tube experience is a rush. I emerge with that elevated feeling you have after a roller coaster. You think, “I felt my heart on the verge of dropping out of my chest. That was fun. I was near death. Let’s do it again.”

At the bus stop, the double-decker buses are tipsy, and it feels like they might crush you. Aboard, I ride the second level, right at the front, where I feel I’m about to be tossed out the window like something belched from a Monty Python pipeworks. People stand on the curb inches away from the buses, which rush to their stops behind other buses. Pedestrians dart out behind a bus just as my bus pulls up, six inches and six seconds away. Navigating London requires delicate timing and a hardy constitution. Not advisable on three hours of broken sleep with The Clash’s ”London Calling” pounding in your headphones.

It’s our first day, and I still can’t remember how to spell Pentonville. Pannington, Pennington, Paddington, Pattonville. Too many “p”s and “n”s. But this will be the home of the Spalding University MFA in creative writing program that I’m taking for these five days in London, the Jurys Inn in Islington. It will take me two days and one good’s night’s sleep to learn this.

The Tube is kind of like a giant hose that has been turned on full blast. You’re the train, and you’re blocking the way of a monstrous, gushing snake of water, and he’s kind of mad. Mad in the British sense of the word, as in more than addled, kind of insane. Each time we stop, it’s more like we got geysered up from the underground and spill and splash into the street. I think I’ve found the Chamber of Secrets.

With my two companions, I walked all the way to Harrod’s of London, only to find out they are giving the whole building a facelift. It’s a bit like coming to visit the Queen and finding her in her bathrobe. While the little touchup is going on, they have draped a curtain over the entire building with a photo image of the building so that from a distance, it looks like the real building. A little powder, a little lipstick and a stiff upper lip, and we’ll all carry on.

Inside, though, did not disappoint. We walked into the hall of a thousand prisms — the chic handbag department, where white crystal chandeliers hung over glass cases of Gucci handbags and watches. Next was the velvety Corridor of the Perfumes, where we managed to walk through without getting hydroblasted with spicy florals and musky patchoulis. That led to the hall of the Egyptian tomb, where the escalators uncoiled like Cleopatra’s snake through a smoky marbled chamber chiseled with hieroglyphics. Here, I kinda got that What-Stays-in-Vegas feeling.

The day includes our own version of a sightseeing tour – Picadilly Circus, Westminster Abbey, Big Ben, Scotland Yard, Trafalgar Square. And then it is done. The tube spews us out near home, and we catch our breath and walk the rest of the way home.