LaDonna Harris to speak at Making a Difference keynote

This story originally appeared in the March 9 print edition of the Albuquerque Journal and the Sage magazine website at abqjournalsage.com. 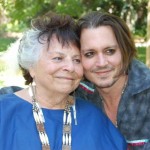 COURTESY OF AMERICANS FOR INDIAN OPPORTUNITY LaDonna Harris made headlines in 2012 when she invited actor Johnny Depp to become an adopted member of the Comanche tribe. Harris will be the keynote speaker at the 2014 Sage Making a Difference awards.

March is Women’s History Month, and as March 8 was International Women’s Day, plenty of stories about fascinating women have been swirling about.

That includes Sage magazine, where the 2014 Sage Making a Difference contest is under way. The deadline to nominate someone for the award, which recognizes high school senior

girls, has been extended to Friday, due to intermittent technical issues with the website. The box accompanying this story tells you how to submit.

A Comanche from Oklahoma, Harris has long been an ardent advocate for Native Americans, focusing on civil rights, environmental protection, the women’s movement and world peace. Director/producer Julianna Brannum is filming “LaDonna Harris: Indian 101,” a documentary about Harris’ life.

Harris made a little celebrity news in 2012 when she invited actor Johnny Depp to become an adopted member of the Comanche Indian tribe while he was filming the role of Tonto in “The Lone Ranger” in New Mexico. Depp accepted the invitation and was inducted into the tribe in a ceremony in Harris’ Albuquerque home.

About International Women’s Day – it’s no small thing. More than 224 events across the U.S. and 1,000 internationally recognized the achievements of women. Events ranged from film festivals to panel discussions to poetry readings to protests about gender pay equity.

New Mexico’s Martha Burk, who hosts the “Equal Time with Martha Burk” radio show on KSFR 101.1 FM, devoted her show to two female members of the Resistance during World War II, who were imprisoned in the Ravensbruck women’s concentration camp. You can listen again to that show at prx.org/pieces/112767-putting-women-in-history-s-pantheon#description.

And the New Mexico Women in the Arts presented a panel on “How Being a Woman Affects Your Creative Process.” The event featured painter Shaun Gilmore, actress Debrianna Mansini and poet/writer Miriam Sagan, who wrote essays in Sage magazine for many years.

Among the most provocative was a protest in Sweden, considered one of the most gender-equal countries in the world, called Be a Man. Based on the idea that the only way women can achieve pay equity is to wait 100 years or be a man, the activist group Kommunal launched a smartphone app and a website BEaMAN.se, which invited women from around the globe to create a male version of any photo of themselves. Participants then share their man photos on social media.

For a slide show of events around the world, presented by Reuters, go to internationalwomensday.com/slideshow.asp#.UxjqoT9dV8E.

The documentary “MAKERS: Women Who Make America,” narrated by Meryl Streep, aired in February on PBS to 2.6 million prime time viewers and announced the launch of a television and digital video initiative to create the largest collection of women’s stories ever assembled. The MAKERS project plans to capture 100 more video stories and publish them at makers.com, as well as launch a global storytelling app that will be made available to schools and communities.

Documentaries ahead this year include a look at women in comedy; at women’s increasing participation in war, as soldiers, diplomats and journalists; and women in space. Those air on PBS stations in June. Look for three more in September.

Check out photos from the recent centennial celebration of the Albuquerque Country Club, in a photo gallery here.

Carolyn Flynn is the editor of Sage magazine, published quarterly in print and daily online at abqjournalsage.com. Reach her at 505-823-3870 or sage@abqjournal.com.